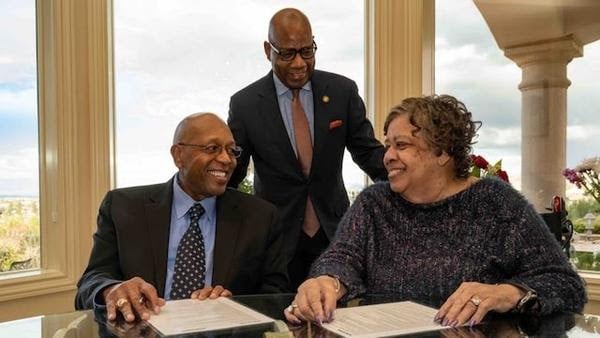 Morgan State University received its very biggest donation since dating from alumnus Calvin E. Tyler. A sum of $20 million was donated to the university, which appears to be the largest private donation from a former student in the school’s 154-year-history, The Grio reports.

Mr. Tyler was a student at Morgan State during the 1960s, studying business administration before switching his career aspirations due to financial reasons. In 1964, he became one of the first 10 UPS drivers on the east coast, working his way up through the ranks to eventually become senior vice president of operations before his retirement in 1998.

In 2002, Tyler and his wife Tina established the “Calvin and Tina Tyler Endowed Scholarship” at his former university, focusing on providing full-tuition to students. In 2016, the Tyler’s made a $5 million commitment to the HBCU, at the time the largest private donation in the school’s history. Now the couple has followed that up with a $20 million commitment, increasing the endowment and going on record as the largest private contribution from an alum not only to Morgan State but to any HBCU.

David K. Wilson, president of Morgan State, spoke about the donation, saying, “Morgan is so proud to call this son and daughter of the great City of Baltimore our own. Through their historic giving, the doors of higher education will most certainly be kept open for generations of aspiring leaders whose financial shortfalls may have kept them from realizing their academic dreams.”

Students applying for the Tyler Scholarship must maintain a minimum GPA of 2.5 and meet the financial requirements. Since its inception, the endowment has supported 222 Morgan students, 46 receiving full-tuition and 176 receiving partial scholarships. Mr. Tyler said he decided to increase his endowment primarily due to the impact the pandemic has had on young people’s education.

“My wife and I have become keenly aware of the effect that the pandemic has had on a number of young people trying to get an education [and] we have the resources to help a lot of young people. This is why we are increasing our commitment at Morgan; we want to have more full-tuition scholarships offered to young people so that they can graduate from college and enter the next stage of their life debt-free,” Tyler told reporters.

MacKenzie Scott, novelist and philanthropist, recently donated more than $1.7 billion to minority organizations and HBCUs. Morgan State received at least $40 million. The university also recently gotten $650,000 in grants from The National Trust for Historic Preservation to help preserve the campus, founded in 1867.

Donna Howard, vice president for institutional advancement, spoke about the magnitude of gifts like these, saying, “Endowed scholarships and other gifts have far-reaching implications for any institution, but for a public, an urban university like Morgan, with students from a broad spectrum of academic, social and economic backgrounds, the need is especially great.”

For Tyler, he wants to give back to the school that helped make him who he was, and he hopes that his donations can help other young people become great.

“We’re trying to help young people succeed, and this goal is aligned with Morgan’s mission; it’s such a perfect fit. We believe that Morgan State happens to be the best institution to use these resources,” Tyler said.

“For public institutions, like Morgan, our charitable alumni are testaments to the legacy we collectively uphold, and the Tylers’ generosity over the years, culminating with this transformative commitment, is a remarkable example of altruism with great purpose. We are forever indebted to the Tylers,” Wilson told reporters.